“Welcome to da Faith” – Some thoughts for you

If someone handed you a roadmap for life, how would you react? I’m sure you would be happy. Now, don’t get me wrong: I’m not saying that this album will guide you through life, but I’m pretty sure it can encourage you when life gets tough, and help you make steps toward being successful as a believer. Success as a believer is not defined as an easy, comfortable life, as the album art describes 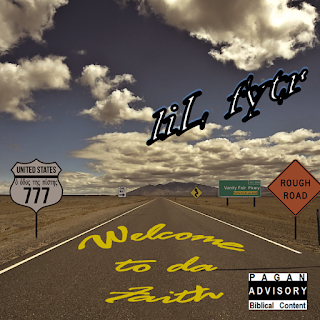 Email ThisBlogThis!Share to TwitterShare to FacebookShare to Pinterest
Labels: Reflections on my music

“I Was There” – Some thoughts for you

So, as many of you know, the past two years have been two of the hardest years in my life. And that’s where this story takes place. In fact, I started writing it before it fell even farther south, and in my personal opinion, I felt like the story would work just fine being kept there—let’s say around the end of August 2016. So the attitudes and actions read of there, were—for the most part—how I was thinking in September of 2016. Before moving on, I would encourage you to read the story which can be found here: http://lilwritr.blogspot.com/2017/04/i-was-there.html.
I was broken up with just over a year ago, which totally threw away all the plans I had for my life at the time. In so doing, anger was uncovered in my heart—anger that was much deeper than just not seeing eye-to-eye with my parents and conversations getting loudly out of hand. Three months later I began talking to another girl, but that was a waste of time that I don’t need to get into here, except to say that after this I became extremely jealous and bitter about the relationships of those closest to me in my life. It was at this point that the introductory section to the story was written, and while it’s done by Good Friday 2017, my original goal had been Easter of 2016, though I don’t think it would have been the same kind of story if it had come out then, because the last six months of serious heart stretching would not have happened yet.
This was the hardest story I’ve ever written. When you write a sentence and you have to pray for forgiveness for each one because it is exemplifying your sinfulness, it makes it extremely hard to write. The inspiration for the story—besides just the fact that it’s the Easter season—was a song from Shai Linne where he raps,
[Jesus is] sent to Pilate, to Herod, back to Pilate
The violence of humanity at its finest
So now He stands before the crowd doomed to die
An angry mob who’s yelling out “crucify”
The way they treat the Lord of glory is debased and it’s foul
But you miss the point if you don’t see your face in the crowd
…
We see disciples sleep and mock today with a lot to say
But we do the same thing when we don’t watch and pray
Like Judas, we sell Christ out to get the treasure
Whether it’s the cheddar or forbidden pleasure
Like the chief priests, we want Christ to surrender
But we want Him out the way when He doesn’t fit our agenda
Like Peter, we have misplaced, fleshly confidence
But we’ll deny the Lord when faced with deadly consequence
Like Herod, we’re curious about Christ because He’s famous
But we quickly get bored with Him when He doesn’t entertain us
Like Pilate, we see Christ and find nothing wrong with Him
But when the world chooses the wicked, we go right along with them
Despite His kindness, we seek to do our Maker violence
The fallenness of humanity at its finest[1]
And, to take it even further, the sermon clip that Shai Linne includes at the end of the song from pastor C. J. Mahaney elaborates,

“‘Were you there when they crucified my Lord?’ the old negro spiritual asks. And we must answer, ‘Yes, we were there.’ Not as spectators only, but as participants, guilty participants, plotting, scheming, betraying, bargaining, and handing Him over to be crucified. We may try to wash our hands of responsibility like Pilate, but our attempt will be futile. Before we can begin to see the cross as something done for us, leading us to faith and worship, we have to see it as something done by us, leading us to repentance. Only the man or woman who is prepared to own his share in the guilt of the cross may claim his share in its grace.”[2]

And it’s been my goal to write it for the past year, placing myself at the scene, putting myself back in the mindframe of an unbeliever, and reflecting on how I would have acted had I been there then. It was a very humbling experience. While most of my attitudes presented in the story were present in my mind in September of 2016, I also drew some parallels to attitudes that were much more prominent in 2010 when I was saved.
I italicize Mahaney’s sentence above, because when you see yourself beating on Jesus Christ—the Creator and Lord of heaven and earth, who holds your life in His hand, who could let you go at any moment—it is impossible to continue living as if nothing happened. When we sin we act like we’re still unbelievers (Romans 6:16), and it looks as though we want to crucify Jesus again, because every sin we commit is one that He was on the cross for already. Without getting into the crazy specifics, I believe Hebrews 6 may speak to this in verses 4-8, when it reads,
For it is impossible to renew to repentance those who were once enlightened, who tasted the heavenly gift, became companions with the Holy Spirit,  tasted God’s good word and the powers of the coming age,  and who have fallen away, because, to their own harm, they are recrucifying the Son of God and holding Him up to contempt.  For ground that has drunk the rain that has often fallen on it and that produces vegetation useful to those it is cultivated for receives a blessing from God.  But if it produces thorns and thistles, it is worthless and about to be cursed, and will be burned at the end (emphasis added).
The writer is explaining, “Look! Take a good look at your life and see what defines you. Is your life defined by rebellion against Jesus? If so, it doesn’t matter what ‘good things’ you may have done, because every time you sin you are telling Jesus to take another beating. If this defines you, you may be too far gone. But, if your life is faithful to Jesus, though you sin here and there—even daily (as we all do)—keep pressing on, watching out that you don’t make a habit of beating Jesus, because to continue in that lifestyle shows that you aren’t saved.”
When you realize the attitudes in your heart that pinned Jesus to the cross, you realize the areas of your life that need to be put to death (Romans 8:13). Repentance from a sin is completed when that sin is crushed and uprooted by the Spirit. Looking at Jesus on the cross, and seeing how you are responsible for that atrocity must necessarily lead to repentance.
So my question for you today is: Were you there? Do you see yourself in that crowd? Even if you have to go back to the day you were saved—and reflect on what He saved you from—can you see yourself there as one of the bad guys?
Or maybe you’re reading this but you’ve never even trusted Jesus. Do you realize you’ve sinned? Have you ever lied? Have you ever stolen anything? Have you ever disobeyed a parent? Have you ever practiced sexual activity outside of the covenant of marriage? If the answer to any of these questions is “yes,” then you deserve to be on the cross that Jesus was crucified on. You deserve the beating that He received.
But even more than the beating He received, you deserve what was going on in the darkness:
Jesus cried out in agony as well. “My God, My God, why have You forsaken Me?”
…
Jesus groaned in pain, and His groans continued for the next several hours.
In my mind I wondered why He was groaning. No one’s doing anything to You now. The pain is over. You’re just up there now until You die.
He screamed. He wept. His teeth started grinding. He groaned again.
“You weren’t acting like this an hour ago!” I yelled. “What has changed?”
He kept yelling, crying, and grinding His teeth.
“What has changed?” I asked in the story. Everything changed. This is the reason why Jesus was sweating blood in the garden. And it’s the part of the crucifixion that is much too often skipped over in Christian circles these days, especially since it’s the most important part. Throughout church history many martyrs have died in much more brutal ways than crucifixion—even Peter was crucified upside down—so why would Jesus be so worried about facing the cross? It’s because while He was up there, for the second set of three hours, He drank the full fury of the wrath of God—the same that those who don’t believe in Christ will face for eternity in hell.
I don’t want you to have to face that. Jesus doesn’t either. It’s why He drank it Himself. However, you must believe that the forgiveness He cried for on the cross counts for you too. You have to see yourself murdering Him, and as such repent for the things that pinned Him there that you didn’t know you were doing (Luke 23:34). A parachute won’t save anyone who doesn’t put full trust in it and wear it when they jump out of the plane; the plane of life crashes for everyone at a different time, and the question is: have you put full trust in Jesus?
Soli Deo Gloria.

liL fytr
Bible college graduate born and raised in Victorville, CA. Was a Springfield, MO resident for about a year and a half. Now back in the High Desert--Victorville, CA. Hold to Reformed and Biblical doctrine. If Reformed doctrine was not in the Bible i wouldn't follow it. Solus Christus, Sola Scriptura, Soli Deo Gloria.

https://sbuniv.academia.edu/JoshWingerd
(Here you'll find "scholarly" papers i have written, either for class or for personal edification)
https://drive.google.com/open?id=0B0ZJpfyVqZA5TW83WUM3UFNHbE0
(here you'll find sermons i've preached)
http://www.ligonier.org/blog/top-commentaries-on-every-book-of-the-bible/
(Here is guidance [from someone else] on the best commentaries for each book of the Bible; highly recommend!)